We’d been home for a month with our newly adopted son after persevering through five years of emotional ups and downs in order to adopt him.  We found him and lost him twice over a five year period, only to watch God finally outstretch His arm to give him back to us.

I used to claim a faith that could move mountains, until I reached a mountain that wouldn’t budge, despite the strength of my faith.  I wanted God to move the mountain before we lost sight of our son. But God wanted me to believe He could still see our son whether the mountain moved or not. In fact, He wants to make sure I don’t forget that He always sees what my eyes cannot.

Only a month after we got home, random things suddenly came up missing.

Both of our sons had new soccer balls for their first soccer season as brothers.  David, our biological son, warmed up with his ball before his game but then failed to put it back in his backpack.  Having his name and team name written on the ball didn’t stop someone from snatching it while he played his game.  He felt humiliated being the only brother to return home without his new ball.

I felt compelled to pray about the ball. I could sense God looking down on that ball, so I asked Him to guide it back to us.

The following week we spotted two boys playing around with a strikingly similar ball. When David approached the boys on the field, he rightfully claimed his ball back after seeing his own name and team name written on the ball.

God saw my son’s soccer ball, as well as his fragile heart.  He guided that ball right back to him, placing us on just the right field at just the right time.

A few days later, I attempted to put our two black Labrador retrievers away in their cage before heading out for the evening, but I panicked when I couldn’t find them anywhere.

My husband, Mike, realized that he’d opened the back gate for a few brief minutes earlier in the day, so someone must have let the dogs out in the yard precisely during those few brief minutes, giving them just enough time to slip out the gate without being noticed. They’d probably been gone for hours already.

We immediately hopped into our vehicles to begin the hunt for the next hour. No luck. Those crazy dogs escaped without leaving a trace.

“God, you see our dogs this very moment. You know if they are okay, or if they are even still together. Please take care of them, bring them home, or lead us to where they are.”

I posted a comment on Facebook about our predicament late that night, hoping someone who lived nearby had seen them or could keep an eye out for them. Within less than an hour, a coworker sent me a website with pictures of all the animals taken in to the shelter each day.  I searched the website immediately and found pictures of our dogs! God saw them and led us precisely to their location.

The missing item saga continued when our younger son’s phone disappeared. Our newly adopted son had already “taken” it once without permission, so we fought the temptation to cast the blame on him without any evidence. He insisted he didn’t take it, that he’d learned his lesson the first time. My stomach turned in knots, not knowing if I should search his bedroom anyway.

God led me to simply pray, reminding me that His eyes see what we cannot see. “I know you see that phone precisely at this moment.  You know whether one child has hidden it or if the other child just happened to misplace it.  Please guide our eyes and ears to that phone and keep us from placing blame where it does not belong.”

The next morning, we heard the phone alarm ring from the same place our younger son finally remembered leaving it the day before. “Thank you, God, for seeing what I couldn’t see.”

Still that same week, I lost a letter from my mortgage company with personal information about refinancing our home. It contained the phone number that I needed to call that morning, plus personal financial information.

I’d rolled it up and attached it to my keychain when I drove to my school that morning to grab something out of my classroom. Then I drove across town to a training facility where I needed to be for the day, planning to call the number while on a break later in the morning.  As soon as I noticed it missing, I drove all the way back to my school to look for it.

I retraced all my steps, yet found nothing on the ground or on any of the tables.  Rather than giving in to panic, I repeated the prayer I’d become familiar with. “God, you see that piece of paper. Please show me where it is.”

I looked down to see a white paper folded in half and rolled up. It had fallen to the floor in my classroom as I rushed out earlier that morning to head to my training.

Sometimes God strengthens our faith by moving the mountain while other times He reminds us that He stands at the top of the mountain, looking down.  When we acknowledge this, He often will outstretch His arm to reach down and place what we cannot see right in front of us. Just like He did with our son, and all the mundane things that go missing each day. 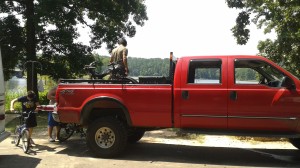 4 thoughts on “El Roiy, The God Who Sees by Rachelle Alspaugh”